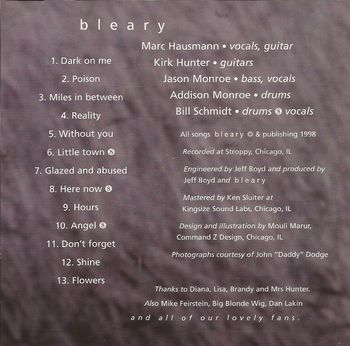 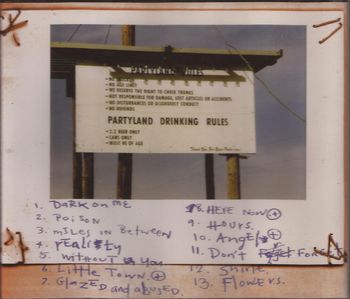 BLEARY
Formed in the summer of 1996, bleary would become one of the best bands that you’ve never heard of. Marc Hausmann and Jason Monroe placed an ad in the Chicago Reader seeking a new guitar player that summer. After reading “accidental country influence” in their ad, Cincinnati expatriate Kirk Vile’s ears perked up. Growing up along the Mason Dixon, Vile had osmotically picked up the nuances of the Appalachian and southern guitar playing along with the slack-key and pedal steel guitar of his environs. He considered this influence to be clearly accidental. Loud rock and roll was his truer love and would become the musical bond between Hausmann and Monroe. A natural connection was made.

Frontman Marc Hausmann (Clownfeast, Bottles and Cans) combines a poet’s sensibility with a rock and roll guitar players sway to the sound. Hausmanns bardish influence is the catalyst for the bands conceptual presence. Marc is the calm, steady anchor in the swirl of bleary’s rock whirlpool of sound. His lyrics and song structures are the spine of bleary. He is an observer of the world, a man who lives life and is unafraid to write about it.

Bassist Jason Monroe (Clownfeast, Bottles and Cans, Hathead, Bric-a-Brac) combines an odd duality of rock bass player in the band. At once he is the solid bass foundation of the sound but at the slightest turn he can be a flurry of unbridled rock, departing from the bass clef of traditional rock and roll into a free form post punk, modern Chicago blah blah, blah,…all the while harmonizing like a bird with Vile and Hausman. People like Monroe. He plays bass and sings like a legend. He has been compared to J.J. Burnell(The Stranglers) and Chris Hillman(The Byrds) among many other really nice guys.

Kirk Vile(Mystery Wagon, Frank Catalano, Genuine Goat, Sommerer/Hunter, Dracos Revolver,)is the strange confluence of musicologist and punk guitarist. He can play every song you ever heard and make up the ones you haven’t. He plays the pedal steel and the mandolin, has a twang in his voice but also knows a 2-5-1 or 2, can yodel and sing the blues. Hausmann and Monroe will mention his hat collection or his reading habit.

Throughout the years, bleary has had many drummers. Unlike many rock bands, bleary has managed to avoid the usual internecine conflict endured by most bands. People tend to leave the band if they want to. Bleary has had its share of children, marriage and divorce.

Bleary disbanded in 2008, due to band members relocating to warmer climes to pursue higher education and, well, warmer climes. Marc Hausmann has returned to Chicago, the city he loves, and continues to write songs exploring the futility of everything. 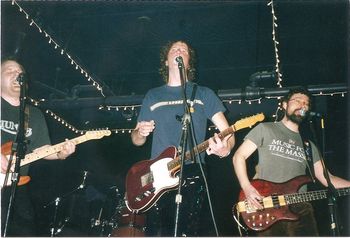 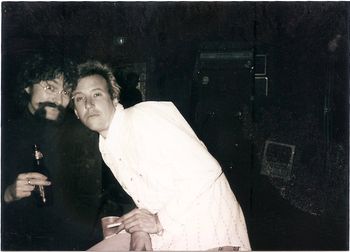 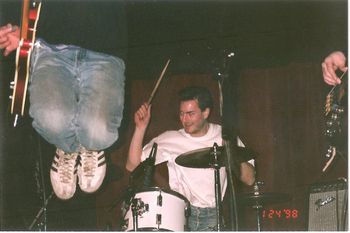 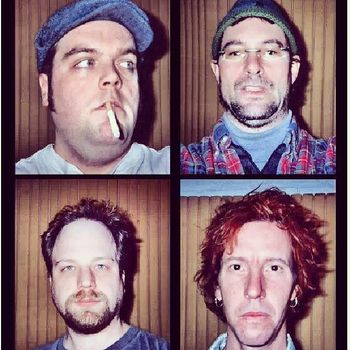 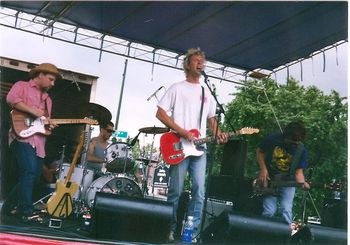 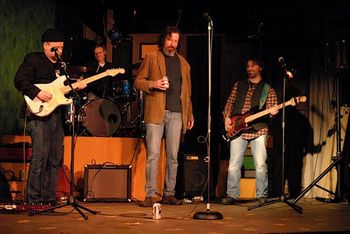 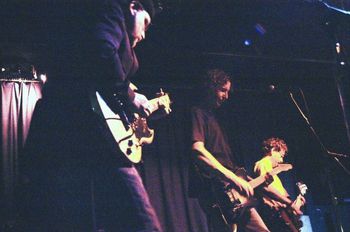 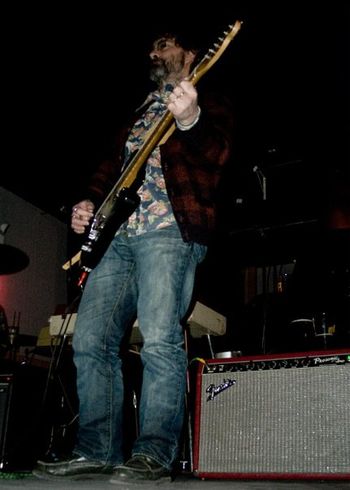 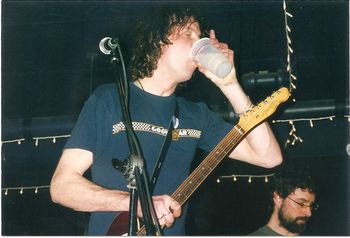